Plot (mangaupdates):
Meet Toni and Mika—identical twins as different as day and night. Toni is a star athlete, outgoing, and popular. Mika is shy, quiet, and academic. Although they look like ordinary junior high school students, when they unite, these twins produce Miracle Powers. Telepathy, teleportation, and magic are all used to help these girls get through the day. Nobody knew about Toni and Mika’s powers until a nosey classmate discovered their secret. Can the twins keep their powers a secret or will they be exposed to the world?

Without further beating around the bush, I didn’t like the manga (by TokyoPop) version of Miracle Girls, as much I loved the animated version. I had a hard time reading the manga because of that reason. I was so used to the original names… especially that of Hideaki Kurashige’s (known as Chris Kubrick in TokyoPop’s version). There might be a little change in the way the story moved (something I don’t remember very much), but it was still entertaining and cute. Setting aside the weirdness of the left to right reading and the names assigned to them, I loved the art work especially how the eyes were drawn! They are so alive!

This one’s a true classic shoujo manga for you to read, in spite of the drama between them and the boyfriends. 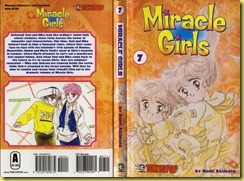