Synopsis (MyAnimeList):
“I” died and was kicked out of the cycle of reincarnation because of the sin “I” committed. An angel told me that “I” won a lottery and he gave me a chance to remember the sin. My spirit possessed the body of the 14-year-old boy Makoto, who committed suicide and “I” tried to recollect my memory. “I” felt distressed by the terrible circumstances of Makoto and the fact that “I” was borrowing his body. “I” have started to realize that people are hurting each other because the world is too colorful to distinguish the true color of themselves from others.

Based on an award-wining first person narrative novel by Mori Eto. The movie won several awards in Japan.

Colorful is a very intriguing and dramatic movie. The protagonist, Kobayashi Makoto is one lucky soul to be given a second chance to live. He refuses the opportunity in the beginning of the story, so I thought, how grave could the events of his past life be? Through Pura Pura, the “lucky soul” who got Kobayashi Makoto’s body found out why he even thought about killing himself. Being lonesome is fatal. As the story progressed, Makoto finally saw the beauty of life with his family and new found friend Saotome.

People who commit suicide are still unknown creatures to me. Life is full of torture and hardship. One will never be brave enough to face it with death. 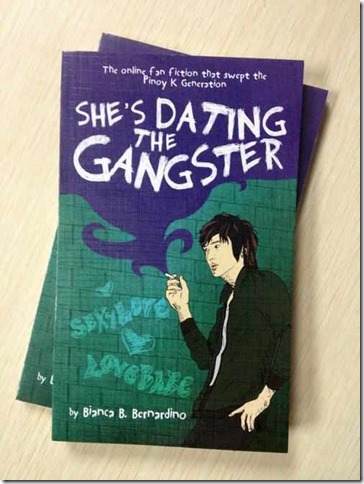 He’s mean, he’s rude, he gets on her nerves and he’s the love of her life.

It all starts when 17-year-old Athena Dizon unwittingly plays a trick on resident heartthrob and bad boy, Kenji de los Reyes. All of a sudden, she finds herself pretending-unwillingly at that-to be his girlfriend to make his ex jealous.

Now, not only does she have to deal with dirty looks from girls in school who want Kenji for themselves, but her supposed boyfriend is getting on her nerves. He’s hotheaded, never seems to agree with her on anything-and everything about him screams “gangster.” Has Athena gotten herself into more trouble than she can handle? Or has she actually found herself a boy she can call hers-“gangster” be damned?

I love the way the story gradually unfolds… and how the drama started blending in with the cheerful flow of events. I’ll be giving SDTG a thumbs up sign because it’s very well written and so emotionally charged. I didn’t want to put it down even when it started turning into a Fly High and A Millionaire’s First Love (which got mentioned in the book btw) kind of thing. The book was off with a good start and I don’t see why I shouldn’t go on reading. True enough, I’m not surprised it really swept the Pinoy K Generation by storm.

SDTG was given a 16+ rating by the way, but it’s not associated it with the “S” word. No obscenities infused, maybe just a bit of precaution for the younger readers, whose parents wouldn’t want to make their kids think it’s ok to cut classes or party during weekdays just because they feel like it. I appreciate the effort of the publisher for promoting that.

Soon, I’ll read the unabridged version of SDTG. I’ll come up with a lot of comparisons I know… but for the moment I want to keep this spoiler proof for you guys!

About (goodreads):
There are still many things Ann needed to know, to explore and live the life she’d always imagined. But everything turned upside down when she learned that she is sick. Not cough and colds sick. No, something much complicated than that.

Ann decides that she’d rather fight when she knows she had no chances of winning. And then came a promise of a hundred and one reasons, from someone she never thought cared for her, and gave her the strength she needed to live. This is a story that goes beyond the boundaries of faith, family, hope and love… it may bring you to tears or give you the reasons to live than just to exist.

I Say…
I don’t want to sound mean or anything, but this book is just the worst I’ve ever read in my entire life. I can’t believe it went through any proofreading or editing. It was so raw I’d want to think of it as first draft. The essence of the story didn’t get through me, because I was more absorbed in trying to figure out the right spelling or spotting grammatically incorrect sentences. I don’t know perfect English, and I didn’t acquire a degree in English, but this book is poorly written.  The Filipino language can easily get through any Filipino reader, unlike the distorted English that will make your nose (maybe even the brain) bleed.

Also, it was so unorganized, and seemed to lack timing. One paragraph they’re in school, the next they’re home or doing something else. The flow of their conversation is unpredictable, afterwards almost senseless.

I would like to say sorry to the author, for saying all the most horrible stuff. But I seriously think you need to practice, work out on the phasing and organize the dialogues you generate.I think other Wattpad writers can write a better book yet they weren’t given the chance like you had. Please, always give your readers their money’s worth. 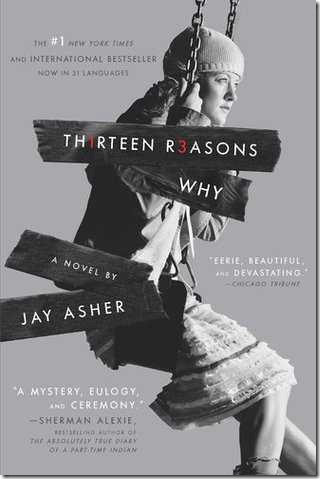 About (goodreads):
You can’t stop the future. You can’t rewind the past. The only way to learn the secret. . . is to press play.

Clay Jensen doesn’t want anything to do with the tapes Hannah Baker made. Hannah is dead. Her secrets should be buried with her.

Then Hannah’s voice tells Clay that his name is on her tapes– and that he is, in some way, responsible for her death.

All through the night, Clay keeps listening. He follows Hannah’s recorded words throughout his small town. . .

. . .and what he discovers changes his life forever.

Thirteen Reasons Why is a short one that took me approximately 12 hours to read. A suspense novel which will be too hard to forget. It’s not suspense per se, but it is capable of making you want to turn all pages faster to get to the ending.

Thirteen Reasons Why is an insight on the life of one misunderstood teenager, Hannah Baker. For someone so young, she’s gone through so much… or she thought she had. Giving up on life became her only option. But before that, she left behind the most creative suicide message ever… which will probably change the lives of those she left behind.

The format is regressive in style, yet simultaneous with the present. As you read, you get two point of views: Hannah Baker’s and Clay Jensen’s. It’s strange how people’s minds were created to be very different from one another. We may have same ideas but our perception will always be different from the other person. I think Jay Asher made that clear in his debut novel. While following Clay as he took the trail marked on Hannah’s map, you also walk through her past and reveal the truth behind rumors that people only believed in.

Thirteen Reasons Why isn’t your average teen novel. It centered on issues that, more often than not, destroy the future of today’s generation. After reading the book I felt relieved to have a good support system that helped me get through the stage of wanting to find a spot in this society. I’m glad to have friends who read my letters everyday and served as vents who kept me from bursting away. 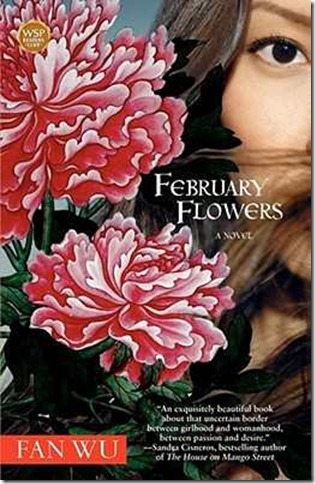 About (goodreads):
Set in modern China, February Flowers tells the stories of two young women’s journeys to self-discovery and reconciliation with the past.
Seventeen-year-old Ming and twenty-four-year-old Yan have very little in common other than studying at the same college. Ming, idealistic and preoccupied, lives in her own world of books, music, and imagination. Yan, by contrast, is sexy but cynical, beautiful but wild, with no sense of home. When the two meet and become friends, Ming’s world is forever changed. But their differences in upbringing and ideology ultimately drive them apart, leaving each to face her dark secret alone.

Insightful, sophisticated, and rich with complex characters, February Flowers captures a society torn between tradition and modernity, dogma and freedom. It is a meditation on friendship, family, love, loss, and redemption and how a background shapes a life.

It is a book with complex characters. Miao Yan and Chen Ming are extremely opposite individuals. Miao Yan knew a lot, even though it was Chen Ming who is more intelligent. Even though friends, they are estranged beings. Yan is like the flame, and Ming a moth attracted to it.

February Flowers is indeed a book about self discovery. It’s not only about one’s sex preference, but self discovery in general. We are all curious of what we don’t know. We learn a lot from people we meet, more than we learn from the people who are actually responsible for teaching us. But who exactly are these people responsible of doing that? Is it someone from your family, your teachers, your friends? Maybe it depends on what you might want to know.

The book became an insight [for me] to China’s early 90’s. As if they were torn between keeping the tradition and embracing the modern lifestyle. One of the funny parts from the book was Ming, Ping Ping and Donghua’s discussion about first kisses, sex and relationships. Their display of naivety simply amused me, as they reveal their thoughts and eventually misconceptions about sex and getting into a relationship. That part almost made me think Ming is ready to accept that she is homosexual. But the author left her reader to choose Ming’s sex preference. In my opinion, she didn’t make it clear when the book ended. Although Ming’s thoughts were all about Yan, I don’t think that makes her a lesbian.

I didn’t like the ending since it didn’t reveal that much. I suddenly felt like I was reading one of those “make your own ending” type of books. But at least Chen Ming didn’t stop, at a time in her life others might consider “the end”. She just kept moving forward.

Featuring Art and Culture that is authentic, not commercial.

Author of award-winning Janus Silang and other books