When timid eleventh-grader and math genius Kenji Koiso is asked by older student and secret crush Natsuki to come with her to her family’s Nagano home for a summer job, he agrees without hesitation.

Natsuki’s family, the Jinnouchi clan, dates back to the Muromachi era (1336 to 1573), and they’ve all come together to celebrate the 90th birthday of the spunky matriarch of the family, Sakae. That’s when Kenji discovers his “summer job” is to pretend to be Natsuki’s fiance and dance with her at the birthday celebration.

As Kenji attempts to keep up with Natsuki’s act around her family, he receives a strange math problem on his cell phone which, being a math genius, he can’t resist solving. As it turns out, the solution to the mysterious equation causes Oz, the program that controls nearly every aspect of life to be hacked into, it’s up to Kenji and his new “family” to stop the hacker before it’s too late.

I think I am looking at sci fi flicks in a different perspective lately. Summer Wars is another movie to remember from Mad House, producers of other biggies like The Girl Who Leapt Through Time, Paprika, Perfect Blue, Mai Mai Miracle etc. Aside from being sci fi, it has drama, comedy, and suspense content… a complete package for any anime fan, even for the not so anime fan. I am so glad to have browsed through an anime review site with positive write ups for this movie.

In this tech savvy generation, we are highly dependent on the internet and gizmos that are capable of multitasking. One click of the button does it all, no sweat. Decision making a whole lot easier and convenient with the help of all these. After watching Summer Wars I realized that we have grown too complacent of the liabilities. As much as technology can ease our everyday burdens, it can also be a cause. We are our own weapon of mass destruction with the help of too much technology. It is scary, to know someone might hack an entire account and disable it… worse may be to take over your identity. After watching this film I believe it can be very possible.

Everything seem to have started with Kenji Koiso, but the characters all have their equal share in the story. In the end, Shinohara Natsuki became the most favored character after her display of hanafuda skills. And if not for Jinnouchi Sakae, their spirits will never be as high as can be. I so love the scene while they all held on to their gadgets and mobiles to play Koi-Koi with Natsuki. The family that “plays” together, stays together, indeed. 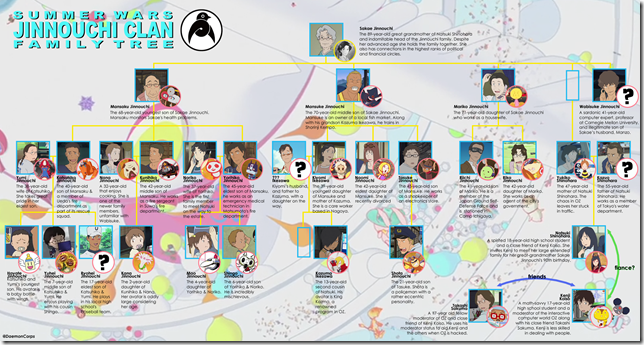 The Girl Who Leapt Through Time tells the story of Kazuko Yoshiyama, a third-year middle school student who accidentally acquires the ability to time travel after an unfortunate accident in a school science lab.

For me, being the original story means it should be the best. But I didn’t like it as much as I liked the graphic novel. My purpose for reading the original story is to understand the graphic novel (and animated movie) better, but they’re just too different.. to the point that I got disappointed because I was expecting more out of this one. Or maybe I just read it too late? I’m not too sure.

There are a lot of surprising revelations in this version, and it made me wonder a lot as well. Can humans really think and act that way in the future? But Tsutsui-sensei kind of tickled my brain because of this. I think I might be reading some more science fiction from now on.