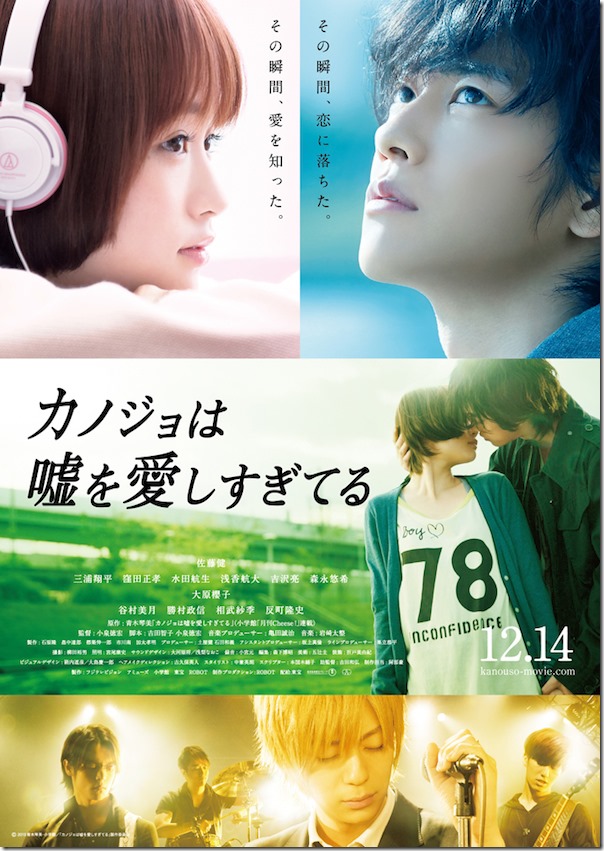 Set within music field, “Kanojo wa Uso o Aishisugiteru” depicts a love story between a 25-year-old sound engineer and 16-year-old high school student Riko, who possesses a gifted voice.
25-year-old sound engineer Aki (Takeru Sato) is a member of popular band “Crude Play,” but right after the band decides to make their major record debut Aki quits the band. But, Aki provides his music to Crude Play under the name of producer Soichiro. Aki begins to date Riko (Sakurako Ohara), whose father runs a fruit and vegetable shop. Riko doesn’t know about Aki’s background, but she likes to listen to him hum. Riko is in a band herself, with childhood friend Yuichi and Sota. One day she is scouted by producer Soichiro.

To be quite honest, I’ve had hesitations before watching this movie. I’m not so sure if it’s because I haven’t read the manga or I am afraid of disappointment since this is a movie in between Ruroken. But I have to watch. Definitely have to watch because it’s Sato-san 🙂 So I did. After that I think I am going to read the manga until the last chapter, and it didn’t bring about disappointment even though it’s not a Ruroken movie. You could just look up all the movies he did and notice one thing: manga adaptations. All of them came from different genres. For me this means Sato-san can easily step up or down and transform into any character you would want him to be.

Out of 5000 applicants it was Sakurako Ohara who got to play as Koeda Riko. Lucky girl indeed, as she got to kiss Sato Takeru thrice 🙂 Being the focus of the story, she didn’t act like a newbie at all. The sweet image suited everything well. I love her stage presence and all… as far as I know it was her real singing voice. I guess that became her “X Factor” to be chosen as Koeda Riko. My heart stopped for the scene Ogasawara Aki played for her and then she started to sing her own rendition of “Sotsugyo“. My focus on the movie started to intensify from here onwards. Maybe this is what they call “effective acting”. It made me want to read the manga right there and then.

Takashi Sorimachi was hateful enough and it made me laugh that this hateful guy used to be Onizuka-sensei (GTO, 1998). He will always remain Onizuka-sensei to me, though.

The music greatly influenced all moods and emotions of the movie. This movie came with a good soundtrack that you will surely search for right after. I just did, and it is currently playing as BGM, in writing. Being in my favorite scene, the acoustic version of Sotsugyo became the most “abused” song on the track list as it brings back all the “feels”.

I haven’t read a single negative review about the movie, and it made me think where all the hesitations [to watch the movie] came from. It was a good one. Make sure to hang on and finish the roll of credits. The best is yet to come. You’ll know why!

Featuring Art and Culture that is authentic, not commercial.

Author of award-winning Janus Silang and other books